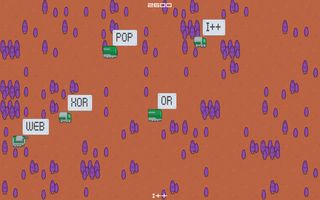 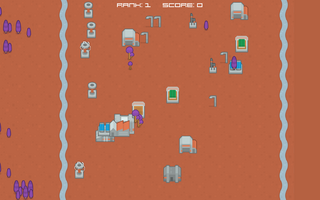 This is the "submission" build for my participation in KenneyJam 2017, the theme being "It's Not a Bug, It's a Feature".  All assets... Art, sound & fonts are from Kenney as per the jam rules.  I've not used 2D much in a while, so I spent far too long just getting Unity to import the pixel art without "smoothing" it into a blur and leaving gaps on the edges. Apart from that early fussing and a few interruptions, it went reasonably smoothly.  A first! (And finished, to boot!)

Thinking on the theme, I decided fairly early to follow Jeff Goldblum's lead in the movie Independence Day, and the "bugs" were in alien systems, which were "features" if you're the one trying to break their stuff.  Continuing on the movie theme of "randomly typing to do things", I thought it would be fun to make it a sort of Typing Tutor game, and in keeping to concept, the words are mostly computer-related terms or actual programming language snippets. There's a lot more detail and polish I'd have liked to add, but I managed to keep it lean and achievable. After all, the point is not only to start something, but to finish it.

I'm pretty happy with how far I got, and still have things I'd like the game to have, so I will poke at it again after a break. If you have any problems with it (especially something not already listed above) leave me a note and I'll see what I can do about it.